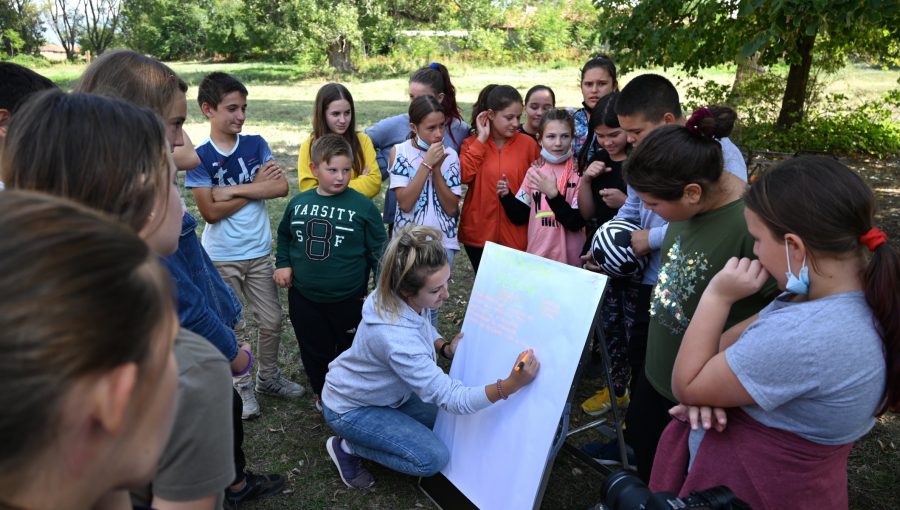 On the third day of the ‘rural heroes in action‘ project, we visited two schools, one smaller school in Germijan and a bigger one in Bach. Because we had to travel a bit further and visit two places we met at the office at 8 am to pack and prepare. When we arrived at the primary school in Germijan we unpacked and greeted the children and their class teacher. Again there was a parkour of activities set out for the children. While the kids were playing actively the SFERA team worked hard on planting flowers and trees. This was a bit of a challenge because of the soil but with some perseverance, it worked out and we could gladden the school with an improved garden.

When the children were done with the first set of their activities they were invited to talk about their recommendations for the municipality. They had a great discussion and provided a good-sized list of ideas. All the while we were also kept busy with planting trees and painting the planters in some bright and happy colours. Feeling satisfied we packed our materials again and waved the school kids goodbye.

Then it was only a short trip to the next school, a larger primary school in Bach. Once again the children were excited to meet their visitors and we quickly prepared everything for them to get started playing. The kids were entertained through several activities on the field. It was nice to see how both the younger and the older children got to play together, for example during the game of tug-of-war. After that, we collected the children’s needs and wishes again to present these later to the municipality. When the discussion had ended some children chose to be creative and draw on the big paper, while others decided to play another game and some went to play football. During our stay at the school, there were also two members of the team that painted the stair railing and the bicycle stand in a lovely colour.

Eventually, the activities came to an end and we prepared to leave for lunch. The kids waved us goodbye and during lunch, we looked back at another successful day. Then back at the office, we prepared for the last day of the project.