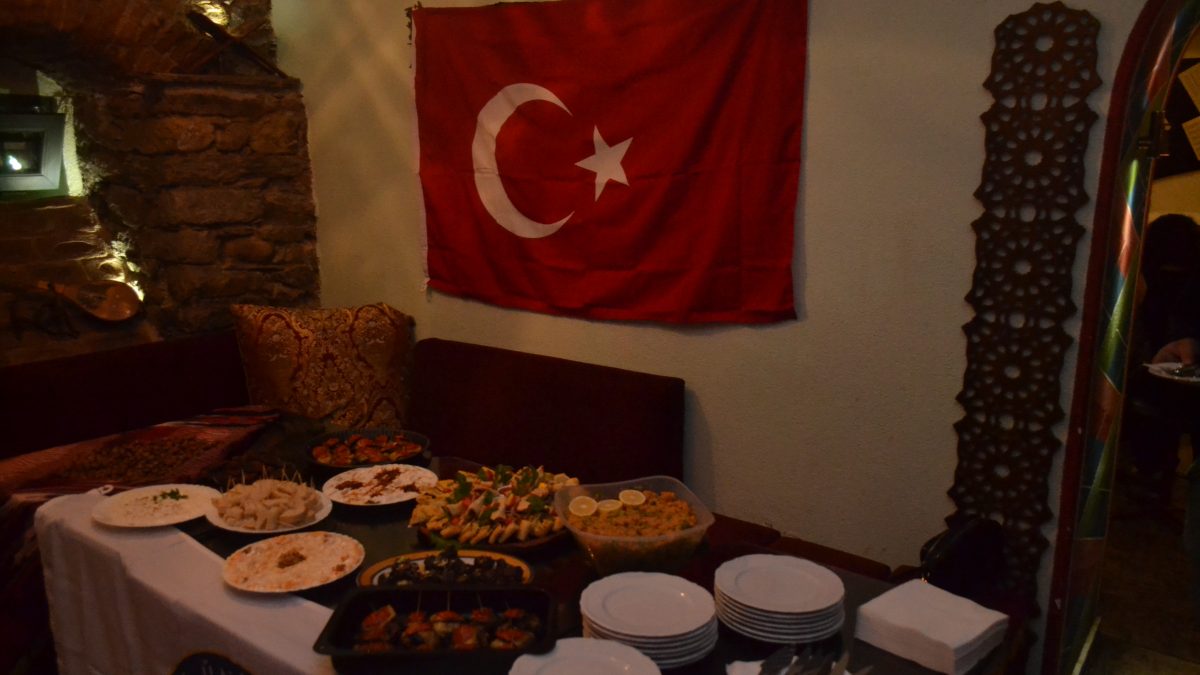 In our second week in the project we have worked on the cultural relations of Turkey and Macedonia. We have examined the similarities and differences between Turkish and Macedonian cultures by chatting with the locals, traveling through the city of Bitola  and watching some documentaries related with this subject. After all of this to promote the Turkish culture among the Macedonian locals, we have organized a Turkish cultural night where people could eat and dance and simply enjoy our culture.

To start with, we have just watched and observed the behaviors of people around us in Bitola to find any differences and similarities with the people in Turkey. We have realized that there are not major differences in the gestures which are used by the people of two countries. However it is valuable to mention that the idea of ‘hanging out with friends’ seemed to be a lot different than what it is like in Turkey. We have realized that in coffee shops or in any type of restaurant, the chairs were directed towards the street which helped people to watch what is going on in the street continuously. People seemed to like to talk about other people or just watch the other people while they are enjoying their coffee with the people that they know. One other thing that we have realized was that most of the people knew English even if they are middle aged which is not very common in Turkey. One other big difference was the understanding of the time issue in Macedonia. The people did not seem to worry about being punctual or they did not seem to be rushing even when they were actually in a hurry. 15 minutes could mean 35 in some cases, which we loved while we were there.

The common specialties were a lot more than the differences between cultures. Macedonian people seemed to be very friendly and welcoming, which is a specialty that Turkish people are also known for. Also a lot of the food options in the markets were sometimes Turkish brands, or even if they were not Turkish brands they tasted very similar. This was understandable due to the fact that both Macedonia and Turkey was under the control of Ottoman Empire. Also seeing the Çarşı and the products sold there was a unique experience for us. The warmth of people and all the common applications in the street made us feel like we were home.

To realize that Mustafa Kemal Atatürk is a known person in Macedonia, and people mentioning his name when they figure out that we are from Turkey made us really proud.

After all of this experience we wanted to do our best for these happy people of Macedonia. We wanted them to have a as good of an impression about the Turkish culture as we have about them. Also we wanted to include as many people as possible thus we have created a poster with some Turkish dishes and tried to promote the night beforehand. On Thursday the 20th of September we went to the food shopping and on Friday the 21th on which the international night took place we prepared the food.

We started the night with a presentation about the demographic geographic and general specialties of Turkey. Later we have played some Turkish traditional music while people taste the food that was prepared by us. After all of this we have showed some of our traditional dances and taught some of them to people.

After all it was a week that we have engaged with many Macedonians and we have figured how we are so similar and even our differences are richnesses. It was a life changing experience.