Research on youth unemployment in Bitola 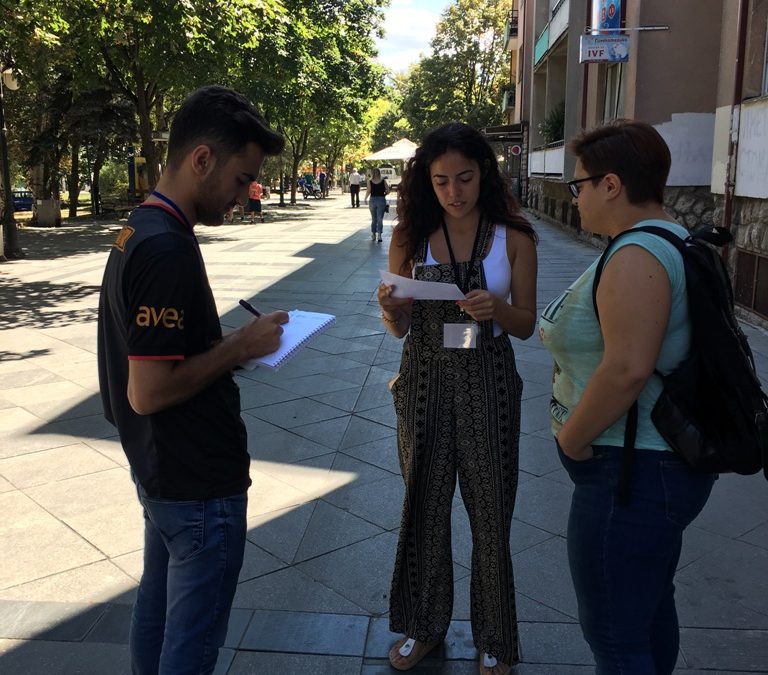 In our first week of our EVS period, the topic that we covered was “healthy lifestyles in Bitola”.  Our aim was to learn how people are living their lives in terms of healthiness while promoting the ways that they can use to adopt a healthier lifestyle. To do that we first determined our plan step by step.

The first step was to make a secondary research using the resources that already exist. The main resource that we have used was the Global School Based Health Survey Results- Republic of Macedonia. To conduct the research in a more organized way, we have divided the issue of health to different headings as exercise, nutrition, psychology and alcohol and cigarette usage. We tried to create awareness about the subjects like people with disabilities and air pollution in Bitola with the questions we asked. Lastly, we have examined the situation of the state and private hospitals in Bitola.

The questions that were asked during the survey were the following:

if yes: Which sports do you do?

if yes: How often do you go?

if yes: How often do you eat?

If no:  What do you do to sustain your mental health?

if no: What are some of the things that could be improved?

if yes: How often do you drink?

if yes: Since when and how much?

The questions were asked to the 30 people from different ages and different genders. We have tried to find as various people as we could so that our sample would be more representative. The first set of questions was about exercising. The questions were answered in many different ways. Out of 30 people, 22 of them considered themselves as people who did sports. The most popular sports to be done were yoga and meditation, handball or daily workouts at gyms. Even though there were people who said that they exercised every day, mostly the regularity of exercising changed between two and four days a week and for 2 hours each time.  The rest of the people, which is counted to be 8 said that they did not do any sports. Which shows the percentage of exercising as 73% among people from different ages.

About the question about the place of sports in the curriculum of schools the results were gratifying. Most people said that there were gym hours 2 or 3 times a day even though they were not exactly sure about the duration. In the physical education class students first warm up all together with the teacher, then usually they are given the chance to choose with the free time that they are given. This includes sports like handball, football, gym, cycling etc. This seems to us as a nice way of making the kids like sport and show it as a fun activity. The second set of questions that were asked was about healthy nutrition. Among the 30 people, 14 people thought that they adopted healthy eating habits while 10 people answered the same question negatively. 6 people said that it depended on the circumstances. When people went further and explained the reasons why they could not take care of what they ate even though they wanted, they declared the reasons as working conditions or busy life.

About the same subject, people were asked about their fast food consumption. The answers were consistent with the previous ones. 19 people said that they consumed fast food and for 14 of them it was very often-again for the same reason-.  11 people said that they don’t consume unless they have to. This showed us that at least 35% of the people want to adopt healthy eating habits which is hopeful.

The answers to the vitamin usage question was as shown below:

The next set of questions were about mental health. Thirty people were asked whether they see any psychologist regularly. However with this subject people did not seem to be as sensitive or with intention as they were with nutrition. Among 30 people only 1 person mentioned that she had a therapist she went to see. She was psychologist herself. When we digged more into the subject she said that the culture of seeing a psychologist did not seem very desirable to people in Bitola which seemed very correlated with our results of the survey. People who said that they did not see any therapist what they did instead to sustain their mental health. Some of them said that they went on hiking while some preferred to talk with friends. When we asked the same question to the psychologist participant, she recommended people to spend more time on their on, maybe write about their times. She also recommended us to promote the importance of therapists more.

We also asked people about harmful habits like smoking and drinking alcohol. 24 people said that they used alcohol. When we asked them how often they drank the answers varied between everyday and once per week. 6 people said that they did not use alcohol. When they were asked the same about cigarettes 14 people answered positively while 16 said no. Those who smoked, smoked some amount between 3 cigarettes and a pack per day. Most of them has been smoking since there were at a young age. So when an overall look is taken it is reasonable to say that drinking is more common among people in Bitola than smoking is. However, those who smoke start smoking at early ages. Through this project about health, we got the chance to talk with local people about their health and Bitola in general, that way we practiced English while learning more about different life styles in Bitola.