Coming out of my comfort zone – Diva blog 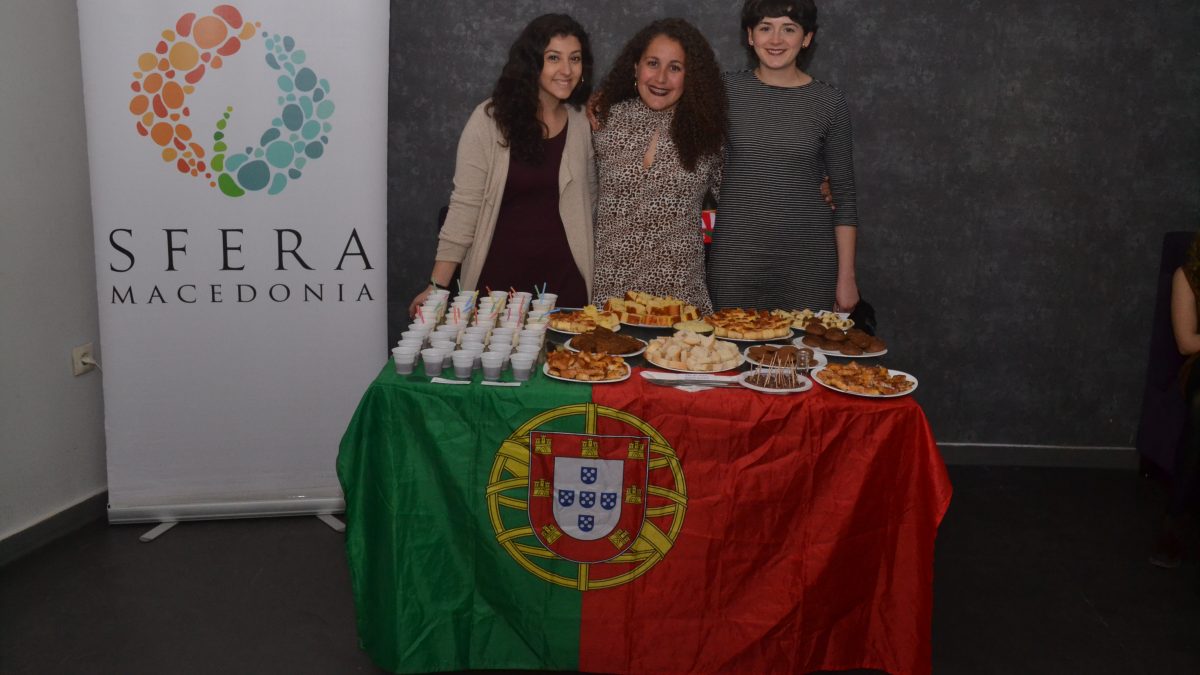 My name is Diva Carvalho and I’m a 24-year-old Portuguese girl from the island of Madeira.

Now that my short-term European Voluntary Service here in Bitola, Macedonia, is coming to an end it is easier for me to just sit back and reflect on my two months and all that I’ve achieved.

It had always been my wish to participate in a European Voluntary Service project ever since I did Erasmus for five months in Czech Republic and started to participate in youth exchange projects. I didn’t have the opportunity to do it earlier because I was still doing my bachelor degree at the time, but now that I’m on my last year of my master degree and writing my thesis, I’ve found that it was the right time to do it.

When I found out that the organization SFERA Macedonia, through the sending organization Teatro Metaphora, was looking for some volunteers for their project “GREEN RAID” it just seemed like the perfect thing to do. I have been a scout for ten years now and because of that I’m really into nature and environment related projects, anything that can lead me to do some volunteer work. That was one of the reasons, but another one was that in my island, Madeira, in 2010, we had massive floods that destroyed many houses, agricultural fields and people died, and besides that, in the summer of 2016 we had several wildfires that burned lots of trees and completely ruined many houses and buildings in the city center and some people died. Because of that, and knowing that some similar disasters happened in Macedonia, meaning that the project would have an aspect towards raising awareness to that topic, it made me want to be part of it even more.

I arrived in Bitola to start my EVS on the last day of January and on the first of February I got to know the team that I would work with. I met Milcho, Mende and Imma, currently the ones that are responsible for the organization SFERA Macedonia, and Beatriz and Belinda, other two Portuguese girls that I would have to work with in the same project. A month later Sehrazat, a Turkish girl, arrived and, while she had her own project, we tried to work together and help each other.

The office, where I spent most of my working hours, had a relaxed and informal environment. Everyone did their job, we would talk and have a good time while working. Our schedule was flexible but mainly we worked from 10am to 3pm during week days, either inside the office to prepare the materials for our tasks or outside. In case I needed something, and even the girls, we could always count on our mentors and colleagues to get it done. That made my job a lot easier.

During the two months, we embraced various projects and tried to do as many things as possible. We had our own tasks but we helped SFERA with their own projects. Every week we prepared a workshop on prevention of natural disasters (wildfires, floods and earthquakes) to provide the community with more information on how to proceed in case one of those disasters happened. To add to those workshops, we created informational flyers with the main topics and we gave them to the people on the main pedestrian street of Bitola. Also, we gave Portuguese lessons twice a week to a group of people who always showed up interested and motivated to learn aspects of our culture and language. Since we didn’t have much time to teach them everything, we tried to give them the basics of the language and interesting facts about Portugal. This was the task that gave me more satisfaction to be part of, since I was able to receive the feedback and see how much they learned and enjoyed. Besides that, we did posters to promote our events and SFERA’s ones and we had a full week to create our own activities. There was a movie night, board games night and environmental cleaning day, where people could join us and go to clean one of the parks of the city.

Having to prepare activities, flyers, workshops, be part of some of the projects that SFERA had going on, all of it made gain some new skills and improve other ones. Thanks to the fact that I had to create flyers, and since I was never really good with these kind of things, it made me improve my creative side. For the Portuguese lessons, we had to plan in advance, prepare the materials and be able to stay in front of a class talking and teaching them everything. Thanks to that I improved my English and even my mother tongue and I became more comfortable talking in front of people. In addition, I became better in planning things for myself.

Talking about my experience wouldn’t be the same if I didn’t talk about the Macedonian culture and its differences to what I’m used to. Once I arrived in Macedonia I could clearly understand that people here don’t use English a lot so I knew from the beginning that it would be a problem when I needed to get somewhere or do something by myself. The cold… It had a big impact on me because I was really not used to it and while now the weather is getting warmer (it is Spring now!) when I first arrived here there were negative degrees so that would have made me want to stay inside the house all the time (even if I didn’t do it was what I wanted to do). The way the locals look at marriage, family or even their beliefs in some superstitions is completely different from what we do. They believe in “promaja”, which is “a mystical force of nature responsible for aliments and deaths of millions of Balkan people throughout history” and while for me it is a really weird superstition, for them it is something real. One thing I noticed too, through trying to do new things, is that people here don’t embrace different things. Once we tried do a game night with games that they didn’t know, they would always say that it was weird. When we said that we would be giving Portuguese lessons, they said it was unnecessary. Despite that we did our job and I’m proud with the results.

Bitola is the city where I’m staying and it is the second biggest city of the country. I enjoyed most of the moments that I had here, from the lovely dinners to my walks in the park where I could enjoy myself and be surrounded by nature. It was two full months filled with new people and places, different points of view, ideas, work, friendship, laughs, just everything that makes a new experience worth a little more. Despite being a small city, for my standards at least, I managed to feel good here and I could even find some similarities to my culture back home, for example, the habit to go to a coffee bar and stay there, even though even we don’t sit there as much as they do. And the habit of being late… despite having it and being known for that, Macedonian people are really late for everything – a fact that I don’t like so much when we are having the workshops. Their food is different but good! I had the opportunity to try homemade ajvar, a traditional relish made mainly of red peppers, and I loved it. I’m even taking it back home to give to my family. Besides that I had the chance to go to some restaurants that have good traditional food too, Bure, for example with their melted cheese!

Being here has given me the opportunity to travel to different countries that probably I wouldn’t have visited if I was back in Portugal. It even gave me the chance to get to now Macedonia and its lovely cities, Ohrid being my favorite one. It’s a dreamy lake city with a fantastic atmosphere, everything I could ask for. While here I visited Sofia, Bulgaria, Athens and Thessaloniki in Greece and to Limassol in Cyprus. Obviously, I had a great time in all of those places, but who wouldn’t? I feel grateful for this wonderful opportunity.

This sort-term EVS gave me the tools to accomplish many of my goals and expectations. All of the small and big things that I expected to improve, I feel that I achieved them. Get out of my comfort zone, improve my social, language and flexibility skills and to be able to feel that I did a good job while I was here. It was really important for me to come here because I felt like I needed to do something different, something for myself and maybe have some impact on others’ lives. I was in need of some changes and I saw on this EVS a chance to do that.

The whole experience was truly amazing. Doing a European Voluntary Service is always a good idea if you want to get out of your comfort zone and be able to do something that will be an addition to your knowledge and character, and will for sure lead you to improve many of your skills, gain knew ones and do things that you wouldn’t imagine yourself doing. I think that to start with these kind of projects, a short term one is always the better decision to go for. After that, and if you feel like you could it for a longer period, then you should apply for a long term EVS. As a tool for social inclusion and active citizenship I could not be happier with the opportunity that EVS gave me. 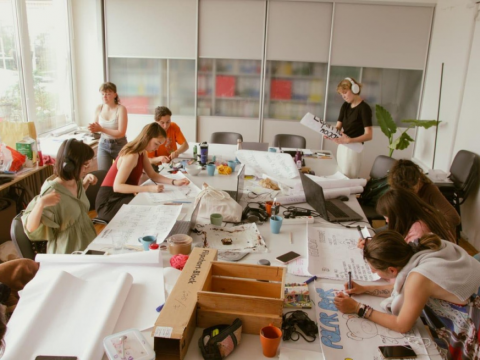 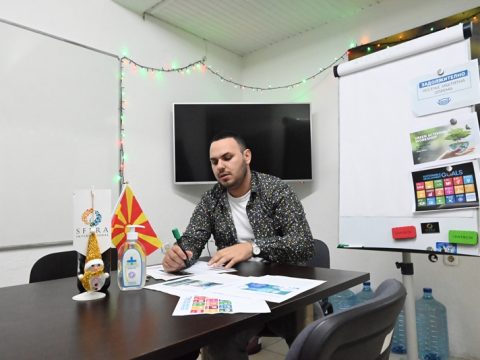 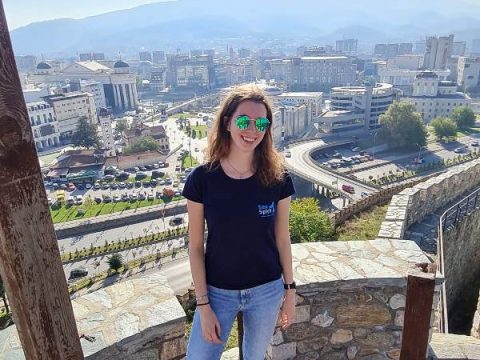